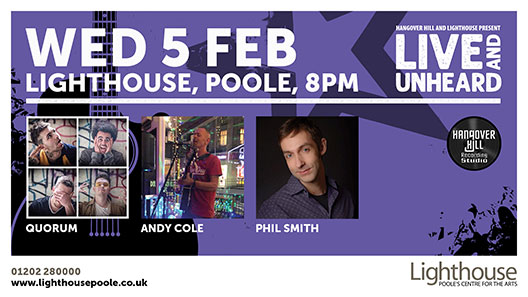 I personally always look forward to the first Wednesday of each month as it is the time for the local live music platform “Live & Unheard”, hosted by Matt Black and Mel Berkhauer of Hangover Hill Music Studios. If you have been living under a rock for the last eighteen months, you won’t have heard of its wonderful contributions to our flourishing local scene. Since its humble beginnings, it has just grown and grown. If you fancy getting down here for next month’s event, you better get your tickets in advance as tonight has totally sold out. The great thing is that word is spreading fast and if you look around you can see that the audience are diverse, people of all ages and many people who have never attended an event like this before.

We are honoured to have humble television celebrity Richard Digance with us tonight, who has offered his experienced services as host. He gives many words of encouragement to opening act Phil Smith as he takes to the stage with explosive applause from the clearly excited audience. Phil is a local lad who was born and still lives a short distance from here. This is his first appearance in a venue such as this and he can be forgiven for having a few pre-gig nerves. As he starts though he shows himself to be competent and confident, using his skills with his beautiful sounding Gibson acoustic guitar to uplift. He wears his Christian heart on his sleeve and temporarily turns the Sherling studio into a place of worship with tunes inspired by his faith. We are treated to his self-written tunes like “Faith, Hope & Love” along with the inspiring “Stand In Glory”. Phil draws from deep inside himself to sing a number called ‘Nothingness is Still a Friend to Me’, which was written together with his best man about a devastating needless loss. The one that grabbed at my heartstrings the most is a tune about his late Grandma ‘Sybil’, who while living in Oakdale used to look after him. Sybil has aspirations in music that she sadly did not follow and here Phil is doing her proud on home turf with a heartfelt beautiful tune in her honour. Tonight this singer/songwriter has proved himself in front of a packed congregation to be a truly inspiring musician; and judging by the reaction of the crowd at the end of his set, they agree with me too. 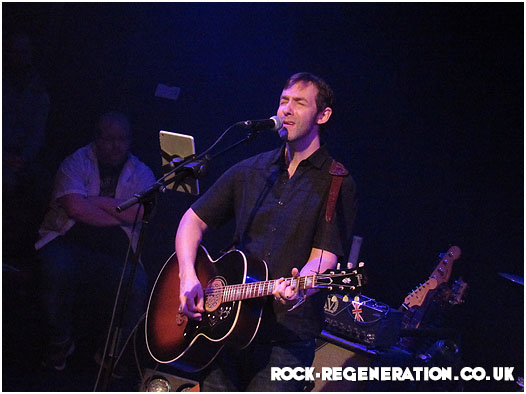 Next up is Andy Cole (no not the Ex-Manchester United footballer), a chap with a story to tell and a happy ending to deliver. Andy was born and brought up just over the border in Ringwood and moved to Manchester to seek a new life. While in Manchester he hit hard times and became homeless, he had no money and his only friend was his pet dog. After 10 years he moved back into the area to try and turn his life around. Turning his back on previous temptations, he met the love of his life Tracey. Andy’s set tonight is of course dedicated to this lady that has given him his life back and so much to live for. Kicking off with a song called “Angel Star”, the audience immediately warm to Andy’s unique vocal style and simple effective string work. Rumour has it this is not the first time he has played the Lighthouse, in more punkier times he supported The Damned when the place was called Poole Arts Centre. I believe I was there that night but as there was probably several Snakebite & Black’s involved I fail to draw anything from my memory. Andy shows himself to have shaken off some of the Punk influences and has grown into a passionate songwriter with plenty to give. He delivers songs like “Don’t Cry”; a song he wrote for his Mother when his Father passed away and another called “Good Enough”, not a Dodgy cover but a song about confidence. The final number was time to grab for the hankies, as love-struck Andy sang a love song called ‘Burning Inside (For You)’. This song he dedicated to Tracey and during virtually the whole song his eyes were fixed on his beloved partner who was sitting in the audience. Andy is a man who has used his love of music as therapy for his past problems, turning his life around; and he should be a great example to all. 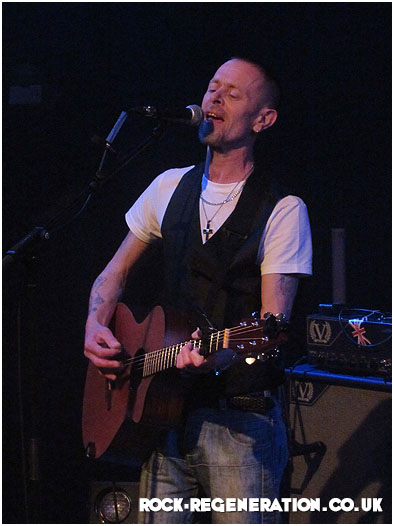 In contrast to the opening two acts; all the way from Devon ‘Quorum’ (not named the Eighties Menís Aftershave), a four-piece band full of youth and energy hit the stage at a fair pace with opening number ‘Headstrong’. The band are made up of Jordan Hookway (Lead Vocals/Guitar), Noah Groves (Bass/Backing Vocals) along with brothers Jake Hodgson (Lead Guitar) and Mack Hodgson (Drums). With some positive words from Richard Digance before hand, band manager, driver, roadie, general dogs body and Father to Jake/Mack; Chris Hodgson then introduced the band. The band seem really excited to be here and after several hours stuck in a van they seem happy to have some space to stretch their legs. They have a unique sound which has a host of different influences; mainly from the world of alternative rock. To me vocalist Jordan sounds a little like ‘Alien Ant Farm’ singer Dryden Mitchell and bassist Noah has a very individual style. The whole band in fact are a really tight unit and have a great chemistry, with each member equally contributing to the bandís sound. They play tunes from their debut EP ‘Art is Dead’, including the title track and a track called ‘Things Don’t Last’. The band are well on the way with the creation of their second EP and tonight we are treated to some new tracks, which seem to have them going in a slightly heavier direction than the debut ep. The band’s final song ‘Boyfriend’ is one of the newer tracks; which is full of uplifting melodic guitars, coupled with infectious rhythms and a spot on vocal delivery. Quorum leave a lasting impression on this audience and promise to return to Dorset shortly as they have another gig booked in Bournemouth very soon. They leave the stage after what has been a tremendous night of music, which was clearly enjoyed by all who attended. 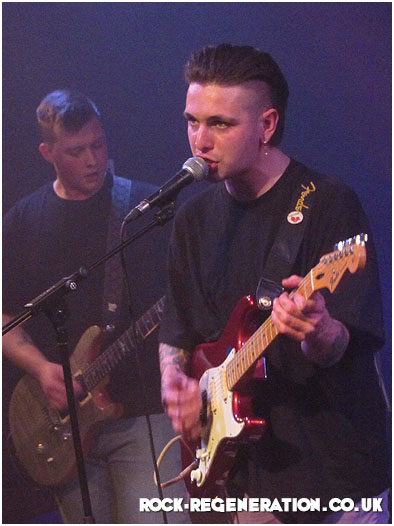 Quorum
Headstrong
Things Don’t Last
Art is Dead
Talk to Me
Could We Be Different
Go
You
Why Could We Not Be Friends?
Doubts
Boyfriend

March’s Live & Unheard event is on Wednesday 4th featuring Lee Ainleyís Blues Storm, Moonbeams & Ethereal and the Elevated. Tickets can be purchased here.
Be sure to book in advance to avoid disapointment!