Home/CD, Chinners/Single: “Trust My Heart” by Liam Wakefield
Previous Next

This month sees the release of Hampshire singer-songwriter Liam Wakefield’s new single “Trust My Heart”, the first single from his debut album “Novella”. The song was put together over the Christmas period while Liam was feeling a little bit worse for wear; after catching something resembling manflu, which sadly forced him to cancel a gig. He mastered and mixed it with the help of a pair of headphones and a laptop while in bed. The inspiration behind the song is Liam’s ever-supportive wife; Liam explains that “When I got back into music last year, this was the first song I wrote; as a kind of testament for her always being there, despite any tough times”. He was a serving soldier in the British Army seeing combat in Afghanistan and deployed all over the world, giving eight years loyal service before a debilitating optical medical condition brought an abrupt end to his Army career. With the Army career behind him Liam took to music as therapy, along with a great way to fill the huge void he had to fill. 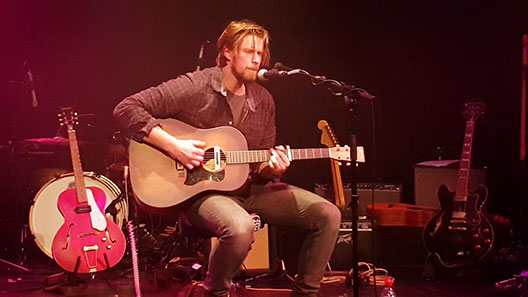 The song took many different forms over the course of the year and Liam struggled to find the perfect shape of the song. Over Christmas it just clicked and he decided it was the right time to record it. He played all the instruments on the track and had a lot of fun layering the vocal harmonies. The track was recently played live at Poole Lighthouse at the ‘Live & Unheard’ showcase and it received a great reception from the appreciative audience. (See Video Below). The track itself showcases this musician’s obvious talent for music creation, don’t be put off by the fact that this tune is homemade, as the production is excellent. It meanders with a delicately picked Americana-influenced acoustic guitar, along with Liam’s vocal which is equally delicate but with a real depth to it. A real talent who looks to have a bright future ahead of him with plenty of projects to keep him busy in 2020.