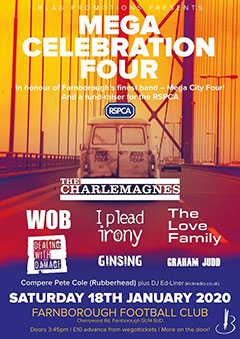 One of Farnborough’s most famous exports Mega City Four are tonight being celebrated on what would have been frontman, the Late Wiz Brown’s 58th Birthday. The band gigged extensively with bands like Ned’s Atomic Dustbin, Senseless Things and The Doughboys. This included notable appearances at major events like the Glastonbury Festival, Reading Festival and a great day out at Finsbury Park Supporting Pearl Jam in 1992. Sadly Wiz died suddenly from a blood clot on the brain in December 2006 after he collapsed at a band rehearsal. The band’s music has continued to inspire since their demise in 1996 with various gigs put together in their honour. Tonight is the coming together of many musicians that have had previous connections with the band and a chance to raise money for the RSPCA, a gesture I’m sure Wiz would have approved of.

Organiser & Compere; the local man with a huge heart and passion for music, Pete Cole gets things underway at just after 4pm introducing a set from a former roadie of the band Graham Judd. Graham eases us in nicely with some familiar tunes played initially on his 12 string acoustic guitar. These include “Distant Relatives”, a great version of “Grey Cell Green” by Ned’s Atomic Dustbin which gets us all singing and “Wrong Number” by the Senseless Things. The set ends with some Bob Mould penned tunes including a Husker Du number and Graham gets the electric Stratocaster out for a spirited version “Change Your Mind”. A great set from a chap who clearly loves his music and knows exactly what songs that Wiz and this audience would appreciate.

Next up are Ginsing, a three-piece band with an alternative rock flavour featuring just a drummer, guitarist and a vocalist. Their original tunes feature a catchy number called “Big City Lights” and another called “Ready For Action”; which is about two of the band members time in the military, stationed just down the road in Aldershot. In keeping with the theme of the event their cover is a nicely reworked version “Ticket Collector” from the Sebastopol Rd album. London punks with a heart “Dealing with Damage” are up next and they get straight on with the job in hand, kicking off with a short sharp burst of Mega City Four goodness with “NoTime”. This is preceded with a bunch of tracks from their new album “Ask The Questions” which shows off plenty of past influences, along with a few of their own ideas. They are joined by Pete Cole at the end for a hilarious reprise of “No Time”; by his own admission Pete is no singer, but he clearly gives it all he has. 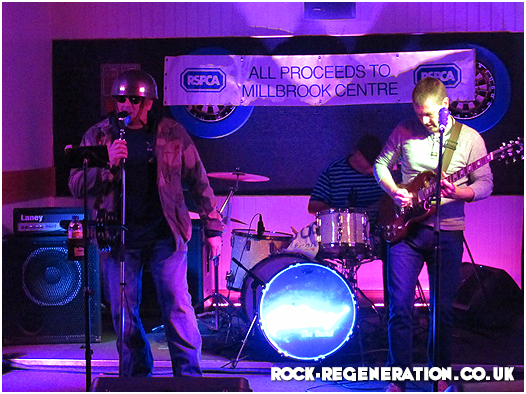 After a short break it’s time for Kent new wave band The Love Family; a band hand-picked by Pete for the love of their material, which spans many years. One of their numbers “Seen It All Before” clearly is a testament to their many years making music. They are accomplished musicians and provide some great entertainment with songs like “Madonna Of Yesteryear”. They also perform their first single “To Be With You” and show what fine songwriters they are and have continued to be. I have always said Mr. Cole has good taste. They attempt their Mega City Four Cover but technical issues get the better of them and they leave the stage looking slightly defeated, but the audience clearly appreciated their efforts. 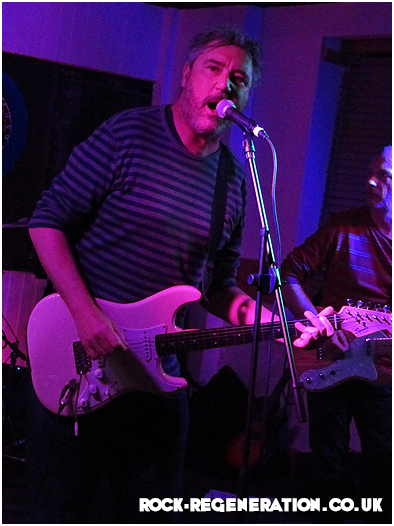 I Plead Irony has many connections with the Mega’s and were, of course, one of the first bands to be added to this bill. They have been on other bills in the past celebrating the band, including “Forward For Wiz” charity events. They are a little heavier and a lot louder than the other bands and clearly this is no issue for their fans, who crowd around the stage calling out all manner of song requests. They kick off with a lovely slowed down version of “Awkward Kid” with Rauf doing great work on the vocals. Tonight they feature stand-in drummer Simon, who himself has a few fans in the audience and he does a sterling job. The band treat us to many great tracks including “Now Or Never” and a powerhouse of a tune called “Wrecking Ball”. 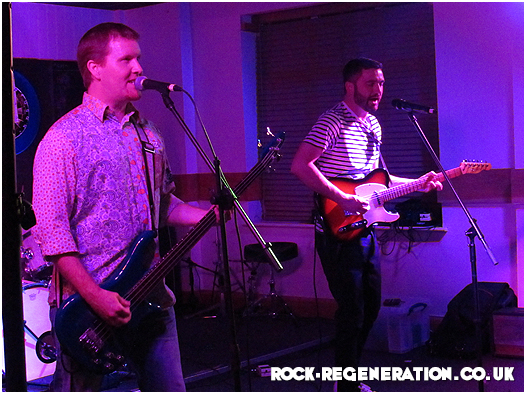 West Country troubadour Wob is a welcome late addition to the line-up after performing here in December at another or Pete’s Charity events. As a fan of the band he wanted to pay his own tribute and decided to bravely play a full set of Mega City Four covers. He confessed to being rather nervous at the daunting task ahead of him and carefully laid out lyric sheets to the side of him to refer to just in case. Ever the professional he nails every tune, with just his six-string acoustic guitar and the boyish grin on his face. Wobís performance includes “Toys” and “Severance” which thoroughly entertain the delighted crowd who give him plenty of appreciation at the end of his set. 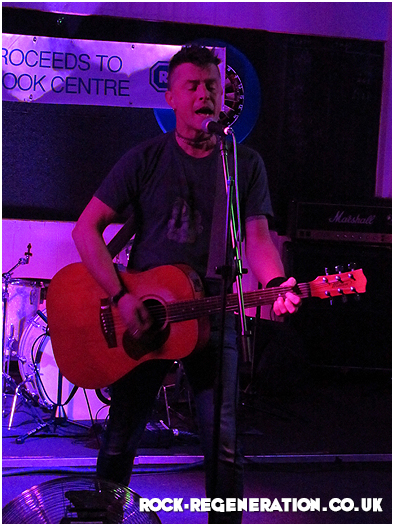 Tonight’s headliners The Charlemagnes have joined us from just outside the big city, that reaches just off the end of the M3 via the M25. They arrive here tonight in high spirits to support this great cause and feature the now short-haired Ben Harding (former member of the Senseless Things) who toured extensively with Mega City Four. They play old school garage punk with an American vein pulsing strongly throughout. The tunes are mostly fast-paced with guitar ably led by expert Ben. Their set ends the evening on a high with a couple of very recognizable tracks which include “Girlfriend” by the ‘Senseless Things’ and a great version of the Mega City Four classic “Miles Apart which finishes things off perfectly. A great event that raised plenty of much-needed money which totalled £436.65 for the RSPCA and one that keeps the memory alive of a group of much loved local sons.