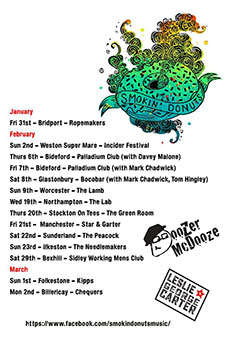 With no tour dates closer to our native Bournemouth we drive the 49 miles in atrocious weather (Note from Editor: it was only a bit misty) to a venue new to us. Bridport’s Ropemakers (pub) is playing host to the Smokin’ Donuts on the opening night of the latest tour. At a little later than advertised one Davey Malone takes to the stage area as the night’s support. Aided by his trusted companion; his dog Bilbo, he proceeds to deliver a set choc-full of stories, anecdotes and musings of life; centred around the wonderful world of a touring musician. He opens with “Dirty Davey” (Levellers) before playing a set of largely original songs. One song is about told the story of Folk Clubs, Festivals, touring and their expectant audiences, and the thorny subject of performer attire! Davey gets everyone onside on this subject and proceeds to encourage many a sing-a-long. “Blowing Bubbles In The Bath” is a set highlight, delivered with humour aplenty. On his penultimate number, he explains that Bilbo “gives him the signal” that the set has ended by turning his head towards his owner as if to say ‘that’s it’. He gives us one more cover in the shape of “What’s Going On” (4 Non Blondes) and takes the plaudits. And with that, we don’t have to wait long for the main event. 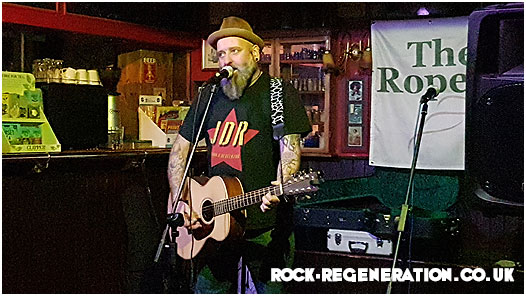 Some twenty or so minutes late  Doozer Mcdooze and Fruity (Les Carter) – aka Smokin’ Donuts take to the stage. Doozer explains the premise of the show and they launch into their opener, the aptly titled Smokin’ Donuts Theme! Seeing one of my all-time musical heroes (Fruity) in this stripped-back format is quite something having witnessed at least ten Carter USM shows over the years. Anyway, a good little throng has gathered to see these two play. Next up from his first Abdoujaparov LP is “Maria’s Umbrella”, which still sounds great today. Doozer then introduces songs from their debut album. The camaraderie between these two is infectious – tuning up, false starts, forgetting who starts which song – you get the picture. “Not Going Back” is an early set highlight, with singalongs aplenty. “It’s Nice Down Here” is an ode to the area while ‘My Little Life’ stays in the personal arena. “Monster In My Garden” again is culled from the Abdou debut but sounds somewhat softer tonight. “I Don’t Wanna Go Home” and “A Place I Wanna Be” seem to complement each other and work well back to back. ‘Let’s Start Having Fun’ is more than apt – these two chaps seem to be in their element right now. Doozer has a passionate, energetic vocal style that incorporates humour throughout as they just bounce off each other. I won’t lie, I would have liked to have heard a few more Carter songs; but they save the best ’til last with a lightning-quick run thru’ “Sheriff Fatman”, where for the last time this evening we are encouraged to sing along one and all. It’s just wonderful and the perfect ending with Doozer tonight being Jimbob. 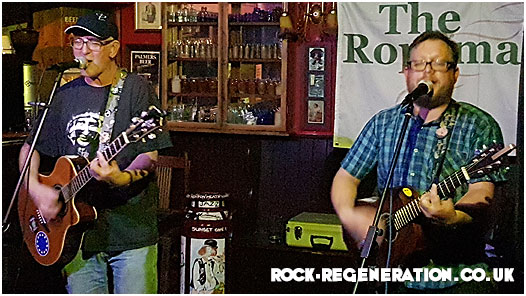 Ok so us purists would love another Carter reunion tour but let’s face it, it isnít going to happen anytime soon. Let’s all rejoice in the fact that we can hear these great songs once in a while, in smaller settings with no pressure – stripped back bare. While tonight’s crowd was sparse, to say the least I’ll assume it was down to the weather. Undaunted, the guys blew off the cobwebs and delivered a no-nonsense opening night set with great support. Sometimes with live music it’s all about the setting – tonight at the Ropemakers was a first for us, and what a great setting.