Including A Date At The Joiners In Southampton

Ambient rockers Haunt The Woods have announced a UK headline tour for March, following the release of their upcoming debut album, Opaque, on February 28th.

Starting in their native Cornwall, the band will play shows in Exeter, including the spectacularly atmospheric Carnglaze Caverns before dates in Bristol, Southampton, Norwich, Newcastle, Glasgow, Leeds, Cardiff, and Londonís The Lexington.

The announcement follows the release of their new single, “Supernova”, which was accompanied by a mysterious and surreal video featuring dramatic cinematography and an emotionally charged storyline. The latest track to be taken from Opaque, it’s an intoxicating blend of immersive and climactic musicality, which pulsates between ever-changing forms of hushed intimacy and explosive passion, anthemic choruses and poignant verses.

“Supernova” follows the release of previous singles “Elephant”, “Amethyst”, and the beautifully cathartic acoustic video for “Fly”, released last year. Throughout the record, Haunt The Woods push the boundaries of musicality, expression and emotional sentiment with an eclectic collection of euphoria, melancholia and reflection interwoven across thirteen tracks of absorbing sonic landscapes.

Blending sounds from alternative, prog, folk and pop and channelling influences from the likes of Pink Floyd, Muse, Fleet Foxes and Bon Iver, Haunt The Woods have crafted a distinctive sound, glistening with ambient swells and underpinned by expressive rhythms and masterly songwriting.

The band released two EPs, The Line and Circle last year, and have performed at festivals including Glastonbury, Boardmasters and Port Elliot, as well as performing sold-out shows at Londonís Old Blue Last and St Pancras Old Church and supporting a range of artists from the likes of Sunset Sons to KT Tunstall. 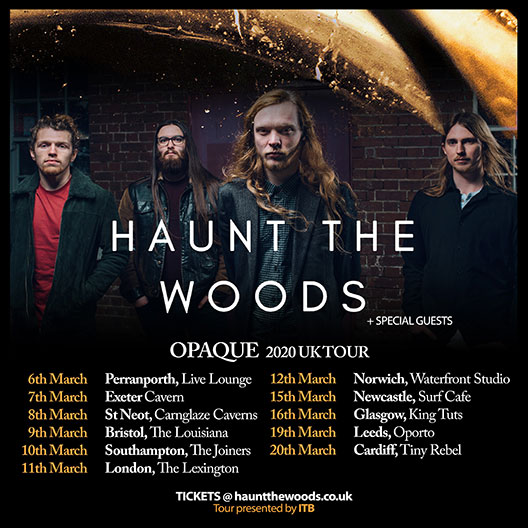